3 Guaranteed Ways to Save You Time on Email

In this week’s blog, I want to talk to you about email.

It’s estimated that somewhere in the region of two hundred and seventy billion emails a day are in circulation and I’m sure there are some days when it feels like quite a large percentage of them are heading into your inbox!

Estimates vary but it’s said that the average office worker receives between 120 and 300 emails a day. So, there’s a lot of emails floating around out there.

As I talk to working parents, about balancing success at home with success in their careers, it doesn’t normally take long before the conversation turns to email, and how to spend less time on email.

So, I’m writing this week about three guaranteed ways to save you time on email.

When you’re processing your emails and an email comes in, if it’s fairly straightforward, the temptation is to fire an email straight back. That might be okay but, I strongly advise that you ask yourself every time that you are about to send an email whether this email is really needed?

Can I pick up the phone or if I’m in an office block can I walk down a flight of stairs and talk to the person concerned? More often than not that will resolve the question or the problem more quickly, more clearly and without a string of emails.

There’s another perspective too. When you send an email, frequently you’re not sending one email - on average an email goes to between two and five addressees so you’re actually sending two three four or five emails. And if you’re sending two three four or five emails that probably means you’re going to get somewhere up to five emails back! So, it’s well worth asking yourself, do I really need to send this email to all of these people? And is it clear what I’m asking of those people? If not then you’re probably going to get five emails back asking for clarification which leads to yet more emails.

An alternative perspective - if you had to handwrite every communication would you really take the time and trouble to handwrite five notes to those five people or would you perhaps take the view that perhaps you only need to write to one or maybe two of them?

Today, following the advent of mobile technology we see people constantly checking email - and that’s not good. It’s not productive, and it’s not helpful. So, tip number two says to limit your time on email. Schedule two or three times a day when you’re going to process your email. Get in the mindset of thinking of processing email rather than checking it, if you’re processing it you’ve got a much more purposeful approach to dealing with email.

Process your email, an absolute maximum of three times a day. Quite often two times a day will be sufficient – and it doesn’t have to be first thing in the morning, in fact sometimes the least productive thing you can do is check your email first thing in the morning because it distracts you from your most important tasks at hand. And set a time-limit - this will vary depending on your role and how many emails you get - but somewhere between 20 minutes to 45 minutes is ample and at the end of 45 minutes shut down email.

So, schedule two or three times a day to process email, sometime in the morning, sometime around lunchtime / early afternoon if you must, and then sometime towards the end of the working day just before you go home - between 20 and 45 minutes - and when you’ve done that come out of email, and turn off your notifications. Turn off the blings and the bings and the pips; turn off the visual notifications and do the same thing on your phone and on your tablets because human nature is such that if you see something saying you’ve got a message you will want to go and see what it is.The likelihood is it somebody spanning you or it’s the latest offer from that company that you bought something from two weeks ago - but by then it’s destroyed your concentration and your focus on what you’re working on now.

So, schedule your time; get on mail, get off email, and turn off those notifications. Now a lot of people will say to me, that’s all very well but their colleagues will complain that they can’t get hold of them. My answer is to let your colleagues know what your timescale on email replies is; one thing you can do is use your email response process to say that you process emails twice a day, and if they need to get hold of you in between morning and late afternoon they should ring or text you.

It’s also worth getting people to understand that email is not an emergency method of communication. If someone in the office has a heart attack next to you, you don’t email the ambulance service…if you look out of the window and see a building on fire across the road, you don’t email the fire brigade…in the same way, if something urgent crops up at work and someone needs to get hold of you make it clear to them that they need to ring you, or they need to text you because if they email you there’s a very high probability you won’t see it for another three four or five hours.

Most importantly here - it’s them that needs to change their working habits, not you. You need to be able to concentrate on the matters that bring the most benefit to your area of work and that’s unlikely to consist of processing emails.

3. Keep Your Inbox as An Inbox

Keep your inbox as an inbox and nothing else. I see far too many people who have hundreds and thousands of emails in their inbox and it’s almost always a recipe for disaster or at least a disaster that’s waiting to happen.

Don’t use your inbox as a storage area. It will get cluttered, it will get busy, and you’re never quite sure where things are. Set up a series of folders that you can use to replicate the folders that you have on your laptop or PC and folders that you use for storing hard copy documents - folders run by project name and areas of responsibility - set up a series of folders like that in your email client and when you’ve processed an email move it across and store it there, and then just forget about it. If you need to get it you know it’s there.

A person I know has nearly nineteen thousand emails in their inbox - I have no idea how they sleep at night; just the thought of that stresses me out! So don’t use your inbox as a storage area; if you’re on top of your emails, then in your two or three email processing sessions a day you should be able to clear the vast majority, if not all your emails.

The other mistake that people make is to use their inbox as a to-do list and again that’s never helpful; you need to run a separate to-do list - I’ll run a separate session on action lists and to-do lists in a few weeks’ time but don’t rely on going into your inbox to prompt you into taking action. Particularly if you have a lot of emails in your inbox you run the risk of missing something. Use your inbox literally as a place for new emails.

To summarise here are three tips that if you put into place I guarantee will reduce significantly the amount of time that you spend on email.

2 Limit your time on email - get off email! Set yourself two or three reasonable periods of time a day to process email, when you’ve done that shut down the email client, turn off the notifications, trust that mail will come in and land and you can wait to deal with it.

If people expect you to be on email all the time, tell them that that’s not the way you work - if they need to get hold of you urgently they can ring you, text you or if you’re in the same office as them they can actually walk up and speak to you in person what a much better and more effective way to do business that is!

Put these three tips into practice and you will benefit enormously. You’ll spend much less time on email; you’ll be much less driven by other people’s agendas, and you’ll have more time to focus on what matters to you both at home with the family and at work in the career.

That’s it for this week if you want to follow up and look at some more thoughts on productivity, [download a copy of the Productivity Code](http://changesmith.solutions/work-with-me/resources “”, or please drop me an email (how ironic!). Email is a big subject for people and I’m going to be running some seminars and workshops early in 2018 to help people master their inbox and I’ll be posting more details in in the coming weeks so keep an eye out for those. 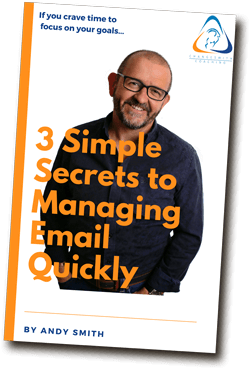 Do you want to spend less time on email?

My FREE ebook - “Make Time for Your Goals with 3 Simple Strategies to Master Email” WILL help you.